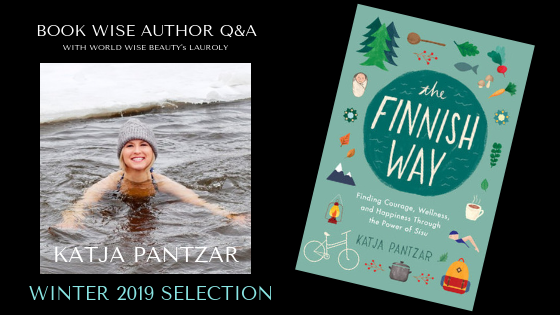 Lauroly (Laura Connolly) Opening:: Welcome to World Wise Beauty Katja. I am so happy to select your book ‘The Finnish Way’ as the 2019 Winter Book Wise pick. It seems like the perfect season to arm chair travel to Finland and imagine ourselves immersing into icy cold water! For some, this might sound crazy, but they will be enlightened once they read your book. I should also add, even if you never embrace ‘winter swimming’ you will still be inspired and learn many tools for approaching a healthy lifestyle and mindset via ‘The Finnish Way.’

I think a good place to start is with the Finnish term ‘Sisu’ as it is the main focus of your book. Sisu seems to be weaved into the Finnish culture and embedded in the Finnish mindset. So what exactly is ‘Sisu’? I used the word mindset, because your book explains how much of life in Finland is approached with ‘Sisu’ psychology. Share what the Finns describe Sisu as and what it means to them…

Katja Pantzar: Thanks for selecting my book. When it comes to sisu, a concept that dates back about 500 years, it’s often described as a great resilience against all odds. Common historical examples include Finland’s victory in retaining its sovereignty over the Soviet Union during the Winter War. The conflict began in November 1939 with the Soviet invasion of Finland and ended with the Moscow Peace Treaty in March 1940. Although the Soviets had three times more soldiers, 30 times more aircraft, and 100 times more tanks, the Finnish army managed to outsmart and deter the Soviet army in brutal winter temperatures as low as minus 40 degrees Celsius. Another often-cited example of sisu is Finnish Olympic runner Lasse Virén’s unbelievable comeback after falling during the 10,000-metre race at the 1972 Munich Summer Olympics. Not only did Virén get up and continue to run, he went on to win the gold medal – and set a new world record.

Now I’m neither a soldier nor an Olympian, but early on when I moved to Finland I noticed that when I persisted in working towards achieving a seemingly impossible deadline at work, or did something gutsy such as riding my bike in -20 degree Celsius weather during a snowstorm, people would tell me I had sisu. As such, I became very interested in the concept of sisu from a well-being perspective and started to look for examples of sisu in every day life. Emilia Lahti, one of the world’s foremost sisu researchers says she initially characterized the ancient Finnish construct as relating to mental toughness and the ability to endure significant stress, while taking action against seemingly impossible odds. But Lahti, an ultra-marathon runner, says more recently her research has led her to view the concept as more than merely a mind-set. ‘The mind–body connection, to me, is emerging as the most defining characteristic of this quality. Rather than viewing sisu as a case of “mind over matter,” I propose we view it as “mind with matter,’” says Lahti. This explains why so many examples of sisu are related to, or carry a physical component. A strong body helps to nurture an action-oriented sisu mind-set to tackle whatever life brings, and turn less-than-optimal conditions into advantageous ones.

For example, having grown up in North America in a culture of convenience, I used to consider swimming to be an activity best carried out in a heated pool. Yet, here in Helsinki, a city surrounded by the Baltic Sea, winter swimming is a popular pastime and a very strong part of the culture. The practice involves going for an icy dip in water of about +2 to +4 degrees Celsius in a hole carved into the ice in the sea or a lake. The first time I went for an icy dip off a dock near the city centre on a cold, dark winter evening, I had to tap into some serious sisu just to get into the water. As I lowered myself down the ladder into the freezing cold water, it felt painful, as though thousands of pins and needles were pricking my body. But when I climbed back up onto the dock, a strange thing happened. My body tingled all over and I felt a sense of euphoria. I later found out the reason winter swimmers appear so blissful post-dip is that the immersion in icy water for 30 seconds to a minute releases the so-called happy hormones. Add to that the health benefits such as increased blood circulation and a peaceful feeling that leaves swimmers feeling mentally and physically stronger post-dip.

Experiences such as this led me to view sisu as an approach to trying seemingly difficult things, embracing challenges, big or small: for example, heading outdoors when it’s cold, raining and miserable and walking or cycling instead of taking a cab or driving. Whereas resilience is generally defined as the capacity to quickly recover from difficulties, sisu means that you finish what you start, you don’t give up, and you approach problems directly, whether that means having a difficult conversation with a co-worker or spouse, or tackling a difficult project such as overhauling a major structure.

Lauroly Q- Now, we all view ice water swimming very differently! What makes your book so interesting is you did not actually grow up in Finland, and yet you cultivated a courageous sisu mindset. It shows us we can always learn and change, especially out of our comfort zones.

I thought it was really interesting when you talked about the emerging research on “embodied cognition’ which holds the theory that the body influences the mind. For me, it makes sense, because I see the mind, body and spirit working together interdependently. Interdependent is a word I use over and over at World Wise Beauty, because it is key to understanding true health and wellness. I don’t see how we can separate the individual and our sense of well-being from the culture or the environment. What makes the Finns admirable and inspiring is they not only manage the tough environment and climate, but also embrace it with spirit. Perhaps because they had to, but never the less, they do so in a very positive and life affirming way.  Tell us more about how the Finns actively ‘transform’ their challenges into opportunities and in turn have created a wellness culture we all can aspire to. Give us some examples…

Katja Pantzar: I think two good well-being examples are ice swimming and winter cycling as outlined above. But I think that there are numerous other examples that include well-being on a general level (not just exercise) such as the Finnish education system, which was described as mediocre in the 1960s. Today, it seems that a week doesn’t go by without a mention in the international press about the excellence of the much-lauded educational model. A sisu action-oriented attitude played a role in that – not trying to be number one (the Finns are a humble lot) – but in tackling the challenge of improving a system that wasn’t delivering good results and setting out to improve it over the years without giving up. I once heard a design director deliver a keynote speech in which she said (I paraphrase) that Finland is a Winter War type of country. When things are going well, innovation lags. But when they’re not going well, people step up to the plate and look for solutions, which is when innovation thrives. And that innovation can range from turning around a poorly performing education system to using cold weather and water as an advantage to create a source of well-being.

Lauroly Q- Nature therapy is really a lifestyle for Finland. The lifestyle and culture is in harmony with nature.  What is your favorite wellness ritual most Finns partake in on a regular basis?

Katja Pantzar: My favorite wellness ritual that Finns take part in on a regular basis is the sauna or sauna bathing, the quintessential Finnish steam bath. After a round of ice swimming, there’s nothing better than a hot sauna to warm up. According to the revered Finnish Sauna Society, the sauna’s health benefits include:

-maintaining clear and healthy skin, and removing toxins and impurities

Lauroly Q- What I really appreciated throughout your book is your honesty and candidness about your own wellness journey and challenges with bouts of depression. For you wellness was a process, and ultimately achieved once you were thriving in the Finnish culture. Where I think the Nordic/Scandinavian culture is strong is their collective health and wellness values. Your healthy culture seems to be sustained by a value system that ensures a strong safety net for all its members of society. It recognizes that life can be hard and sometimes we need help. I absolutely loved the chapter on early childhood building blocks. You are a parent yourself and raising young children. What does Finland do well in this area? If only more cultures would understand the health and happiness connection and the importance of movement and play for children. Especially in the tech driven culture today…

Katja Pantzar: In Finland, as in other parts of the world, I think one of the challenges in raising children is the battle against sedentary lifestyles and technology — too many hours of screen time. (I must confess that I am sometimes guilty of giving my son too much screen time when I’m on deadline.) What I noticed early on in Finland is that there is an inbuilt culture of heading outdoors whatever the weather. There’s a saying in many Nordic cultures about there being no such thing as bad weather, just inappropriate clothing and that attitude is instilled early on in children, who, starting from the daycare years spend time outdoors every day, year round. Their relationship with nature is also nurtured – a recent survey found that 96 per cent of Finns participate in outdoor recreation, on average two to three times a week, according to the Natural Resources Institute of Finland (Luke). Those outdoor activities include walking, swimming in natural waters, spending time at a summer cottage, picking berries and mushrooms, bicycling, studying nature, boating, cross-country skiing, sunbathing on the beach, picnicking and collecting wood for household use. And that’s reflected in children’s lifestyles as their parents take them out into nature. In school, for every 45 minutes of instruction, children have 15 minutes of free time, when they head outdoors and that’s another concrete example of encouraging both being outdoors and play, which have a load of wellness benefits and help to ensure that they return to the classroom readier to focus and concentrate.

Lauroly Closing: Thank you so much for joining me Katja. It has been a pleasure and a honor. There is so much wellness wisdom packed into this book and I wish I could chat with you about it all! I know my readers will be adding this very inspiring and interesting book to their wellness library and maybe even taking a trip to Finland too! What really matters, is we all can glean and cultivate wellness by sharing and learning from each other. Sisu is now part of my wellness lexicon, along with hygge and lagom. Nordic culture really is about living with values that support overall well-being for the individual and the society. Finnish wellness values are practiced and expressed with a wonderful persevering spirit, which we can most definitely cultivate in our culture. I encourage everyone to learn more about Katja’s work at her website.

Katja Pantzar Closing: Thank you so much Laura, I appreciate your interest in The Finnish Way!